Within the scope of defining devices to reduce the vibration levels of the main landing gear door, important steps towards flight test have been achieved.

The GVT on the main landing gear door has been performed and the data is currently being used to update the FEM. The updated FEM will allow a more accurate prediction of the door behavior during flight test as well as the assessment of structural mitigation devices.

The new monolithic nose landing gear door concept has been frozen. The new door consists of a stiffener panel concept made from monolithic carbonfibre prepreg.

Within the scope of defining devices to reduce the vibration levels of the main landing gear door, the CFD and FEM community have achieved important results. On the CFD side, most of the unsteady calculations have been completed and are currently being analysed, with only a few calculations currently still underway. Simulations have been performed with and without the nose landing gear and also at take-off and approach conditions with different landing gear positions, in order to cover the important conditions during the landing gear cycle. The FE model has been simplified and distributed and the coupling of the already available CFD results with the FE model is currently underway. The next steps will be to complete the CFD runs and the analysis of the results as well as providing the input to the FEM community for coupling.
The definition of the flight test instrumentation has been completed and the preparation of the ground vibration test is currently underway, with the test being scheduled for February this year.
The design and manufacturing concept of the monolithic nose landing gear door has also progressed further. Several concepts of door were studied (by design and/or analysis) to select the most suited concept for final design. At this stage, the main concept is based on a door composed of a lower skin with several longitudinal cells and a second concept with transversal cells.

The FE community has performed first calculations to ensure model conformity over all partners. Close cooperation is ongoing between the CFD and FE community to ensure a smooth transfer of results. The planning of the GVT and FT is succeeding with the FTI being completely defined. The GVT will most likely be performed in January 2015. Several designs for the monolithic nose landing gear door have been assessed and close cooperation with Airbus has been established to ensure a smooth certification of the new door for flight. 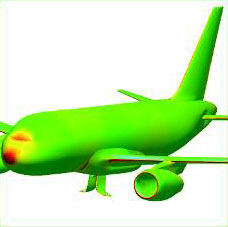 The geometry clean-up to get simpler geometrical shapes and watertight geometries for meshing and CFD calculations is ongoing and almost complete. The meshing approach and number of meshes needed to satisfy the needs of all partners were also discussed and appropriate actions were placed. First numerical results on simplified aircraft geometries have been obtained by Kungliga Tekniska Högskolan and CFS Engineering SA, with the other partners following soon. The following points have been discussed:

Figure Simulation of the flow field around the main landing gear door of an Airbus A320.