Multifunctional TED studies continues to draw interesting results from numerical assessments of the TED concepts of the partners. Cross-comparison between all partners’ results against AVERT 2D benchmark was completed and delivered during summer 2015. This data is now available for use in the downstream assessment activities, to be performed later in the project. In addition to the 2D assessment activities, a code validation exercise against the 3D benchmark is ongoing, expected to deliver in November 2015.

Preparation of the TWT for testing continues at the University of Manchester, using their quiescent bench test facility.

Quiescent tests were performed at NPR of between 2 and 5. Of particular interest is the successful continued attachment of the jet at NPR 5, as shown in the figure below.

A high speed camera was installed into the Schlieren imagery rig. The resulting images collected confirmed that the flow remained steadily attached to the Coanda surface. The blurred area seen in the 250µs exposure below is a result of effectively averaging the turbulence in this area.  The second image taken with a 1µs exposure captures this turbulence with greater clarity.

Preparations for the planned transonic test regime are ongoing, with work focussed on preparing the data acquisition system and refining the model design.

The numerical assessment of two potential TEDs is underway. These devices, which are designed for achieving micro-circulation or buffet control, are being evaluated against the numerical benchmark data which was obtained from the previous EC project AVERT. Both 2D and 3D experiments are in progress or planned. A number of 2D test cases have been applied to the fluidic TED by several partners, with close correlation of results between partners observed. Some minor compensatory factors are now being applied for comparison to the baseline data before a final appraisal of results is reported. Some corrections are being applied to the 3D benchmark data which will account for the specific wall configuration.

In parallel to the numerical activity, the design, prototyping and test of two conceptual TEDs is progressing well. Two SaOB actuator arrays have been installed and tested in Tel-Aviv University’s (TAU) WT, with encouraging results showing performance as expected. The design of the ‘Supercritical Coanda Prototype’ device has been progressing, with early bench top tests conducted and providing valuable feedback into the design process. 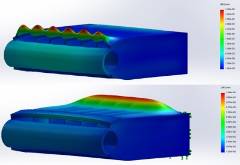 The next steps for this study will be to finalise results of the 2D micro-circulation and fluidic Gurney-flap models, and complete the wall corrected 3D flow conditions for analysis. The physical prototyping activity will move into a detailed data analysis phase to allow design refinement, as well as the design of the forthcoming wind tunnel experiments.

Fig. 2: Coanda Device before and without throat reinforcement.

There is an increasing need to maximise the aerodynamic performance of the wing over the entire operating envelope. Small changes to the flow at the trailing-edge of the wing can significantly affect the flow over the whole of the wing. The multi-functionality of trailing-edge flow devices are expected to generate benefit to the aircraft once cost, weight, power, maintainability and reliability considerations have been resolved. Recent developments in a number of miniaturisation technologies and the associated manufacturing techniques also mean that it is now becoming possible to package a flow control actuator and its support equipment into the limited space available at the trailing-edge region of a wing. 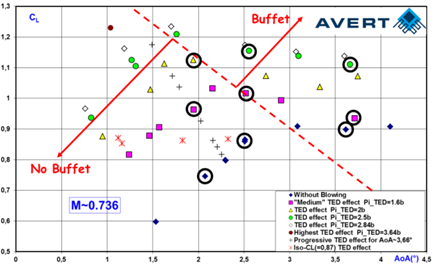 o support the project objectives, AFLoNext work package “Multifunctional Trailing Edge Concept” is undertaking an appraisal and analysis of multi-functional TED flow control systems with the aim of reaching TRL 2 for the most promising concepts so that they can be further matured in future projects.
An initial numerical analysis is being conducted to study the potential aerodynamic benefits of a variety of trailing-edge devices to achieve micro-circulation or buffet control such as fluidic Gurney flaps. This will enable us to determine the key design and performance requirements of such devices. This numerical analysis is based upon baseline data from the previous EC project AVERT. This baseline data has been validated and published by ONERA in a technical note to the partners, and used to produce a number of test cases which forms the framework of the numerical analysis. So far, the results look promising with a reasonable correlation seen for the 2D test cases.

We are also performing an experimental evaluation and technology demonstration of two different TED concepts. Work has been started on the design of an aerofoil tile to house a matrix of flow control actuators that will be laboratory benchtop tested later in the project.

Taking into account the large number of partners, performing numerical simulations, it was decided to conduct a benchmark exercise to compare CFD results provided by different methods, strategies and codes, for both: flow control via micro-circulation concept and buffet control via fluidic TED. For this latter, two experimental databases were selected from two test campaigns performed in the framework of the EU FP6 AVERT “Aerodynamic Validation of Emission Reducing Technologies” project: