The data from wind tunnel test, which was conducted in late 2014, were analysed by DLR. Based on this test data, the proof of noise reduction potential of different treatments on a/c level could be given. The preliminary design of low noise devices for the main landing gear of the A320 test aircraft has been already done by Messier-Bugatti-Dowty (see Issue #3) and prioritised during a specialists meeting at Airbus in Filton in summer 2015. Beside this, gear-wake flap interaction noise has been isolated from array measurements in the wind tunnel test data and could be identified in the far field, which is important for the assessment of the community noise near airports. FT qualification for Landing Gear is ongoing.

The activities on the FSE modification are proceeding very promising. After the principle design of the FSE modification has been done in the first half of 2015, final tests on material and the attachment of the porous flap side edge treatment have been carried out. In the meantime a pair of A320 flaps has been manufactured and delivered at the begin of October. These flaps will be modified in early 2016, after the Critical Design Review has been held end of 2015. As for the landing gear the preparation of the FT qualification documents is going on, to enable the flight test of the porous flap side edge in 2016 as planned.

The preliminary design of low noise devices for the main landing gear of the A320 test aircraft has been done by Messier-Bugatti-Dowty SA. Furthermore DLR conducted a gear swing test in order to avoid interferences of those devices with the functionality of the landing gear during its operation.  Isolated and installed tests have been conducted in two different wind tunnels, and were concluded in December 2014. The data from those tests are currently being analysed, but first initial results prove the importance of gear wake flap interaction noise for the overall airframe noise signature.

Successful wind tunnel tests with the flap side edge treatment by using a scaled A320 flap geometry have been performed (already reported in Newsletter #2). Now the main steps towards the manufacturing and the modification of a pair of original flaps for the use on the test aircraft have to be taken next. After the last design details and the related technical questions for this modification will be finalised and answered during early spring of 2015, the preparation of the necessary hardware - flaps and porous side edge treatment - can be initiated to make these parts available for the flight test in 2016. 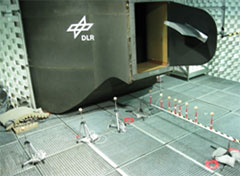 Within the preparation of landing gear and flap side edge related noise reduction technology for the AFLFoNext flight test, three important results were achieved. The first one, and the most interesting from a scientific point of view, an acoustic wind tunnel test on flap side edge noise was conducted by EADS-IW, Airbus and DLR in the Acoustic Wind Tunnel Braunschweig of DLR. The scope of this test was to identify the major noise sources on a realistic Airbus A320 type flap side edge and to define certain design criteria of porous treatments for noise reduction. On basis of the acquired noise data it turned out that apart from pure side edge noise the fish mouth and certain whistling cavities are the major noise sources to be tackled for the flight test. Furthermore, it could be demonstrated that the spanwise extent of a porous side edge treatments should be in the order of 50% of the maximum flap thickness. With respect to the flight test preparation these wind tunnel results are of particular importance since they helped to define all necessary design constraints for the porous flap side to be tested in flight.

Figure - Flaps Side Edge Noise Test Setup in AWB right) outer wing part in the vicinity of the leading edge.

For the landing gear activities, the noise reduction technologies to be applied on the ATRA aircraft have been defined and priorized. In parallel, the preparation of the CAD model for the planned CFD study on optimized flap settings to reduce the gear wake flap interaction and thus interaction noise has been conducted by Airbus Operations GmbH and Messier-Bugatti-Dowty SA. The CAD model consists of all major gear parts e.g. main leg, leg door, wheel set and side-stay, which are considered reasonable to conduct the CFD study.

The flap side edge activities were affected by a request of change which has been initiated end of September 2013. After its agreement by the consortium and the EC, the technical & design specifications for the planned wind tunnel tests had to be re-arranged. Now the D&M of a highly detailed A320 FSE - to be used as reference - and one PFSE to prove the low-noise capability is ongoing. The opportunity of a second PFSE geometry with bigger span wise extension of the porous material has been considered and is currently taken into account by a modular model design. The wind tunnel test in the AWB at DLR in Braunschweig/Germany is scheduled for May 2014.